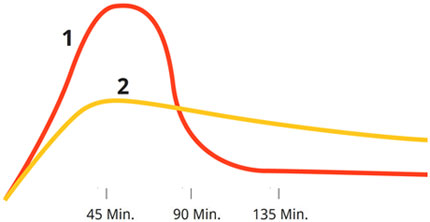 The blood sugar level is the amount of glucose dissolved in the blood. This form of sugar is the energy supply for the cells. Glucose is transported from the blood stream into the cells by the hormone insulin. The cells use the glucose to create valuable energy through a chain of chemical reactions. Without the hormone insulin, the glucose remains in the blood and does not enter the cells. The result is a high blood sugar level whilst the cells still urgently require glucose. An increased glucose concentration in the blood is known as a “sugar high” or hyperglycaemia.

In order to benefit from the blood sugar level lowering property of beta-glucan, a product must contain at least 4g of bioactive oat beta-glucan per 30g of carbohydrate consumed in the meal.

“The working mechanism behind the claimed effects of oat beta-glucan has been conclusively proven and depends on the increased viscosity of the consumed food and the beta-glucan contained therein. When the consumed food reaches the small intestine, a high viscosity delays the uptake of nutrients, including glucose.” (EFSA Journal 2011;9(6):2207)